Just like any other day, employees arrived in the workplace sparingly, filling the cubicles and getting their coffees ready. Once more, the manager was already sitting at his desk, grumbling and shouting:

You’re way too slow, again! How am I supposed to get my work done with you slowing me down every day?

The other employees were staring at each other. They were embarrassed by his outburst but deep inside they knew he was right. Satisfied by the nods in the assembly, the manager calmed down. As usual, he quickly got absorbed by his screen and numerous emails. He was not the moody type, just a normal guy. His team liked him very much and his performance record was exemplary. He was often described as someone caring and trustworthy with a genuine interest in people. Yet once again, his fist hit the desk loudly as he started screaming.

That’s it, I’m done! Slow and unreliable old crap! You made me lose five hours of my life, again. World will be better off without you and I’m going to let the board know about that.

He stood up suddenly and clenched his fists in anger. He then walked rapidly to the stairs, climbed and disappeared. Nobody saw him again for the day, but they all knew he was going for a confrontation, if not a fight. It was going to get really ugly up there.

The day after, the manager arrived later than usual. The other employees were already at their desks. They were smiling. The workplace was full of relief and happiness. When they saw him arriving, they stood up and applauded him.

Good job boss, you did it!

The manager looked at the desks and smiled as if it was the best day of his life. He did it! He got IT to replace all the old computers of the office by brand new ones.

A recent survey by Harris Interactive on behalf of Crucial.com revealed that over a third of Americans verbally or physically abuse their computers. Frustrated, angry, helpless, they curse or scream at their machines, sometimes even hitting them with their fists. These abuses often target the weakests. The slow, infected or malfunctioning computers.

Even if you may have experienced some empathy while reading my short story, computer slavery is not – yet – a crime. Data centres make thousands of them work tirelessly day and night in cold caves, and their parts are salvaged when they are unable to keep up. They are nothing but machines, so who cares? Probably nobody. Then why is it that over a third of Americans are so quick to lose their temper to their devices?

Computers created new stressors in the workplace. In addition to experiencing traditional stressors, employees can now worry about technology breakdowns, technology slowdowns or electronic performance monitoring (Smith, Conway, & Karsh, 1999). Technostress is “a modern disease of adaptation caused by an inability to cope with the new computer technologies in a healthy manner” (Brod, 1984). The rage directed at a malfunctioning computer is one of its antecedents. Others can be the pace of technological change, the lack of training, the increased workload induced, and the lack of standardisation. All of these apply to organisations and employees are thus at the frontline of this danger.

The slaves may then not be the ones we expect. At the end, the computers are not the ones ending up distressed, strained, or even subject to musculoskeletal disorders and carpal tunnel syndroms (Coovert, Walvoord, Stilson, & Prewett, 2009). They take a mental and physical toll on us and we agree to it. We sometimes want to free ourselves of the clutches of technology – to “disconnect” – but it is easier said than done. 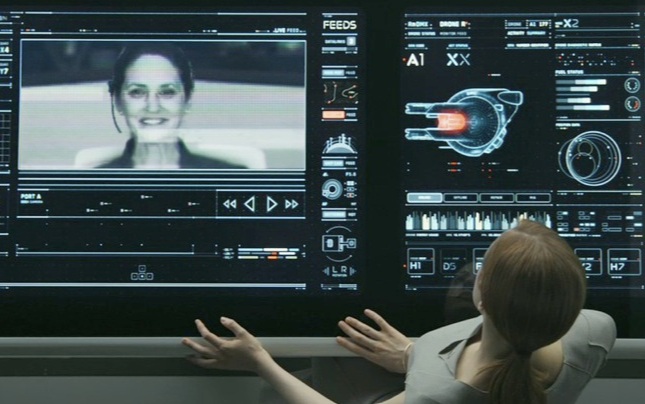 “Are you an effective team?” repeatedly asks the manager Sally (from the movie Oblivion)

This slavery is subtle, concealed. We may not even be conscious of it, which is exactly why it enslaves us according to Jacques Ellul. However, there might be a future point at which this will be made in the open. Some futurists and science-fiction writers believe that, one day, the intelligence of the machines we create will become much greater than our own. This is the technological singularity. As the great Alan Turing was writing, “once the machine thinking method has started, it would not take long to outstrip our feeble powers. … At some stage therefore we should have to expect the machines to take control” (Turing, 1951).

A future article on GeekStorming will look into robotic managers, and this dreadful prospect is closer than we think. Once computers take over organisations, the short story which introduced this article will seem oddly outdated. Who will then be the old, slow and servile workers who are unable to keep up? At the end of his play L’Île des esclaves (Isle of slaves), Marivaux wrote:

You were their masters and you behaved badly. They become yours and they forgive you. Think about that. … May then joy and pleasure succeed to the sorrows you have experienced.